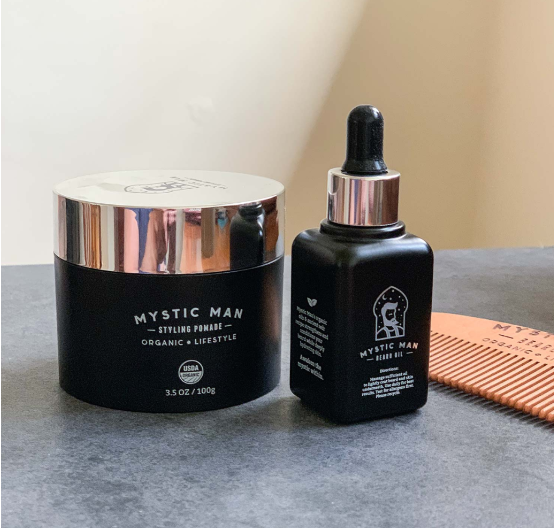 When it comes to grooming, nothing makes a more powerful statement than a well-groomed beard. Your outfit can cost a million bucks but if you are rocking it with a scruffy or patchy beard, chances are you’ve ruined your look. With many products and brands on the shelf making all sorts of claims on what you need for the perfect alpha mane, it’s often hard to know what to add to your grooming kit.  Lucky for you, we tried and tested many products and found Mystic Man Beard Oil as one we think you, our readers will really like.  So check out our thoughts on this dope product to get your beard looking superior.

Rule number 1 for good beard grooming, is love your skin guys. Yes, a good strong beard will eventually cover the skin beneath but that’s like ignoring the roots of a tree and hoping it will grow strong above ground. So before even using Mystic Man Beard Oil, we wanted to know what’s in it. Turns out Mystic Man Beard Oil is actually a natural blend of organic ingredients like black seed, jojoba, rosemary, sandalwood, sunflower, sesame, and coconut oils with sedr extract.  All of which sounded like wholesome stuff for healthy skin, except for the last one, sedr extract. ‘What on earth is that’, we thought! So we did a bit more digging on that ingredient before slapping on the oil.

According to the Department of Pharmacy, Faculty of Medicine and Health Sciences, Thamar University, Yemen, sedr (ziziphus spina-christi) is a plant native to northern and tropical Africa, Southern and Western Asia with well-known and well-researched nutritional and medicinal qualities. Even the ancient Egyptians were using this plant thousands of years ago for its ability to deeply condition and stimulate hair growth.

So having established that Mystic Man Beard Oil has all the good stuff in it, natural, organic and the science backs it up, it was time to sample the oil. However, most products that push the all-natural agenda usually taste (not recommending you eat this stuff), smell, and look like baby food. However, we were pleasantly surprised! The oil comes in a slick 29.5ml bottle, with a dropper for easy and wasteless application. The oil smells good but only to what you’d expect from a non-perfumed product. The consistency is silky smooth, not sticky, and feels natural to the touch. We did a small patch test first to ensure we didn’t flare up in any rashes but the organic promise gave us some reassurance that this wasn’t going to cause any problems.

On the first full application after a shower, the oil soaks well into the beard and instantly gives it a healthy shine. Hours later, the beard still feels soft and retains moisture, reducing the itch and therefore the dreaded dandruff. According to Mystic Man, using their beard oil daily moisturises the skin and hair follicles, reduces skin inflammation and dead skin cells, boosts collagen production, and promotes healthy hair growth. I think it may take longer-term use to see some of the latter benefits proclaimed but so far we love the beard oil.

If you want to try out Mystic Man Beard Oil check out their online store and let us know what you think on our Facebook or Instagram page.

Until next time, stay slick!