More Than Just a Tat: Ink and Urban 💉

When it comes to swag, no other platform allows you to express your individuality like some good ink. In a world shaped by corporate giants mass producing for every high-street, it was inevitable that eventually, everyone would look the same. We can mix and match our outfits to forge a “style” but our fashion cycles are often determined and limited by what the stores have to offer. However, when it comes to tattoos, each one has a unique story to tell and the sky is the limit. With ancient styles like mandala, bushido and chicano making a come back, Slick Motive takes a look at what it means to get inked up. 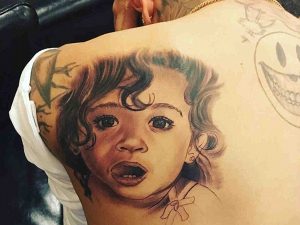 When ink is done right, skin becomes a canvas for the visual art. Limitless tattoo designs allow styles to constantly evolve and stretch the bounds of creativity. Urban culture has always been about identity. From rap flows to graffiti tags, break moves to mad swags, originality has always been the essence of the movement. So it’s no surprise that the scene has embraced and incorporated the idiosyncratic nature of ink. 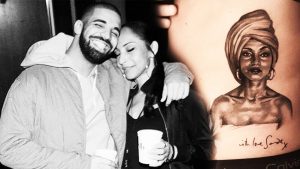 Drake expressed his love for Sade with this dope body mural

Over the years tattoos have acquired a bad rap. Old-fashioned social stigmas, bad decisions and whack work from scratchers with no skills have literally scarred the art-form. Unfortunately the rising popularity of TV shows like “Tattoo of us” and “Tattoo Fixers” have exacerbated the problem. Not to say that bad ink is not a reality, but there are fewer programmes showcasing good work.

The perennial nature of tattoos makes them the perfect medium for making a permanent commemoration or declaration about one’s life. David Banner’s Mississippi back piece is a fitting example of the symbolic power of this art-form. Rappers love to rep their city and what better way to do this than carrying that name on your back for the rest of your life. On the other hand, this same aspect is how you end up on “Tattoo Fixers” when things go wrong. 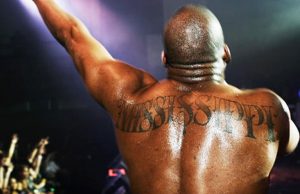 David Banner’s home-state tribute: Carrying the weight of the state on his back! #whenthecitygotyourback

Every tattoo has a story tell. In an interview with Chris Heath for Details Magazine in 1993, Johhny Depp explained how his body was a journal and how ink told his story. True to this notion, tattoos have been used to tell the story of the streets. Some of the best body art autobiographies have hailed from the most sinister of sources. Prison gangs and crews have been known to show affiliation and loyalty sealed by pain, blood and ink.  Intricate details are etched into their skin depicting their beliefs, values, fears and passions which help them identify with others members of their gang. 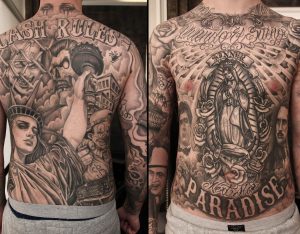 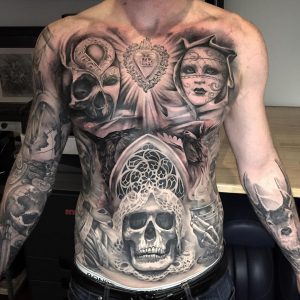 The style and placement of tattoos bring the concepts being conveyed to life. Popular styles such as Mandala, Bushido and Chicano draw inspiration from other cultural art forms and symbolism. The urban scene has certainly acquired a taste for these beautiful designs. What’s even more impressive is that young people are reviving these ancient symbols in their own unique way and promoting multiculturalism. 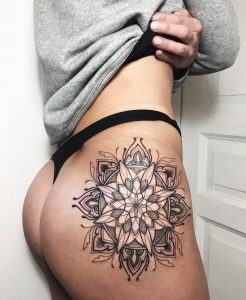 A mandala is a spiritual symbol in Hinduism and Buddhism, representing the Universe

The act of getting a tattoo can be a spiritual, emotional, mental as well as physical experience. This makes the finished product deeply meaningful and personal to the owner. Even the smallest tattoos can represent a lot more than what meets the eye.  Project Semicolon was founded by the late Amy Bleuel in 2013 to raise awareness and support for victims of depression, self harm and suicide through semicolon tattoos. Semicolon tattoos represent a life that could have been ended (full stop) but the individual chose to continue. Straight deep!

Ultimately, you can tell a lot about someone by looking at their tattoos. The Ink and Urban feature is all about getting to know your favourite artists through their tattoos. In our next article, Slick Motive take a look at some of the sickest ink in the hip-hop industry and the stories behind them. Stay tuned…